Welcome to restaurant 汽 [ki:], a new stylish Lebanese restaurant run by a Michelin chef that opened it’s doors in May 2021 and has been making waves ever since.

Restaurant Ki is located in the Gojo district between the Kamo river and Takase river on a five minute walk from Keihan Line’s Kiyomizu-Gojo Station or 15 minutes from Hankyu Kyoto Line’s Kawaramachi Station. 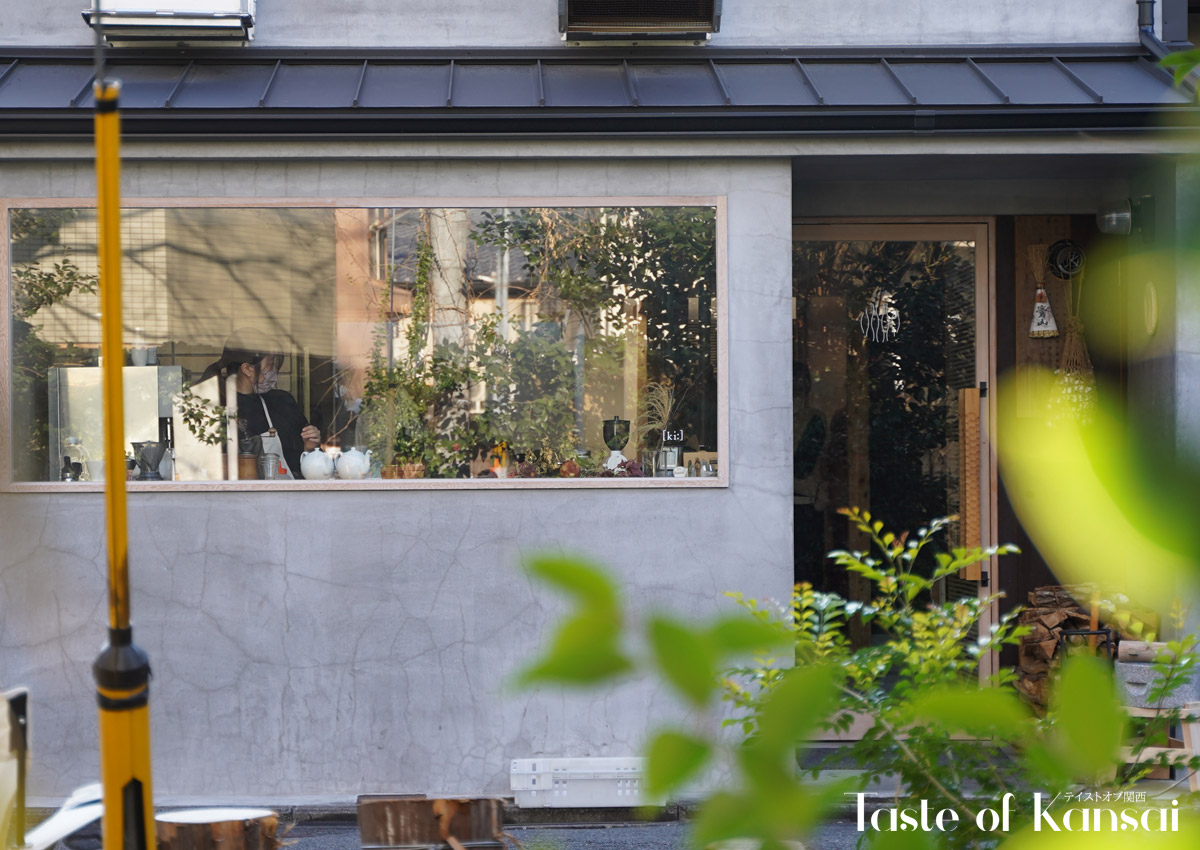 The restaurant is located in a quiet neighborhood facing the Takase river. The exterior of the restaurant has a simple but stylish mortex finish with the entrance under a canopy. Right next to the entrance is a wood chopping block and a mesh bag filled with cloves of garlic creating a rustic feeling at the entrance. 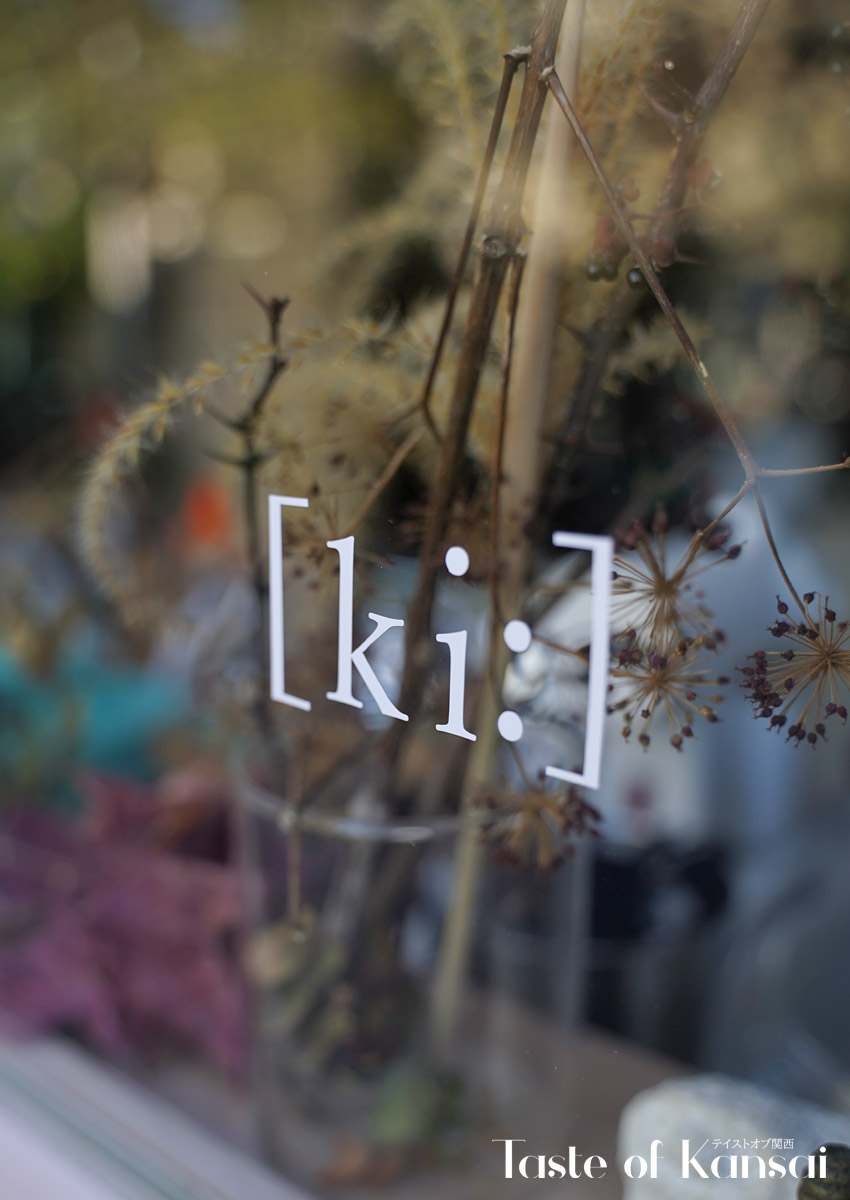 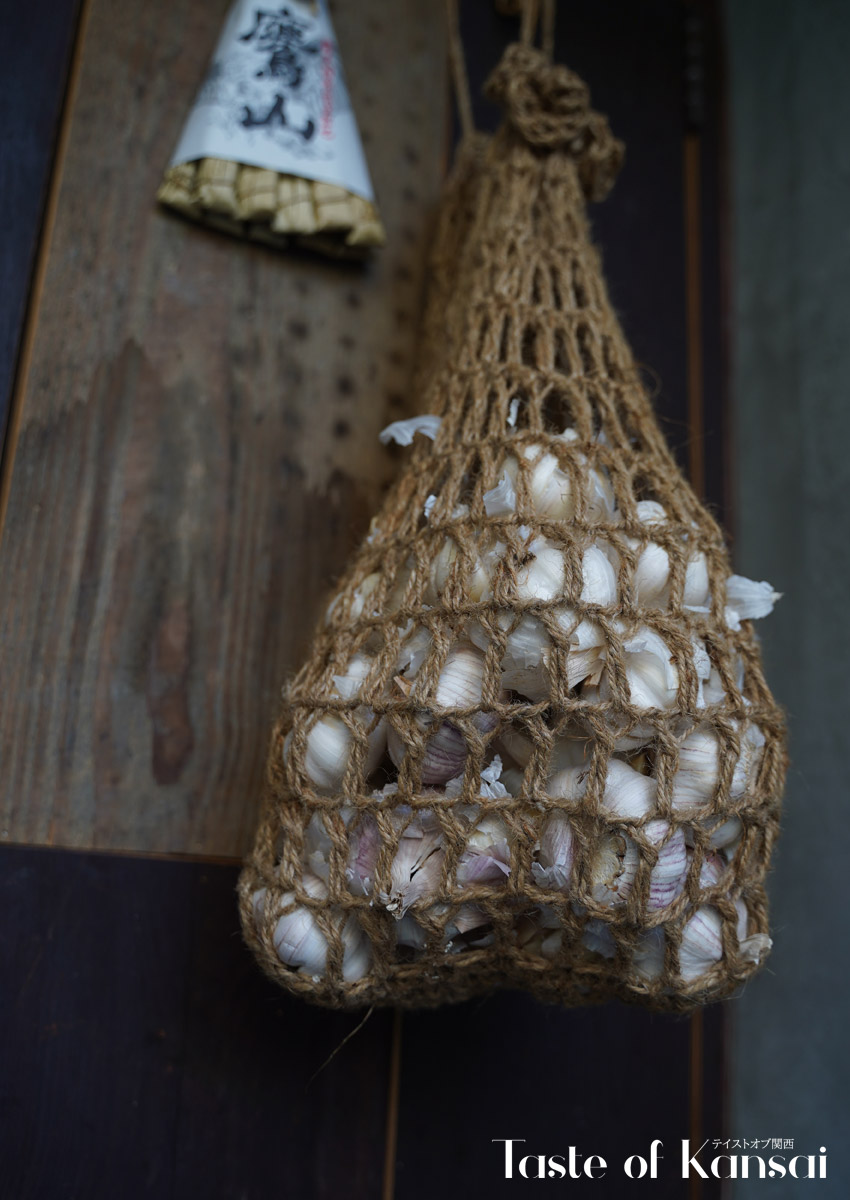 The origin of the word Ki「汽」meaning “steam” in Japanese, represents rising clouds, water vapor, and water. It is also used to describe brackish water (areas where seawater and freshwater mix).
In addition to the original meaning, the restaurant also defines Ki as “intangible”, “changing (unstable)”, “mixed (uneven)” and “spreading”. With those definitions Ki is promoting change by mixing foreign substances in an unbalanced amount and what is born from that change becomes a foreign substance again that continues to change. Ki wants this activity to spring up like a cloud, become hot, and spread.
As one of the starting points of this activity, “Ki [ki:]” was established in Gojo area, sandwiched between the Kamo River and the Takase River, which is also roots of the owner. 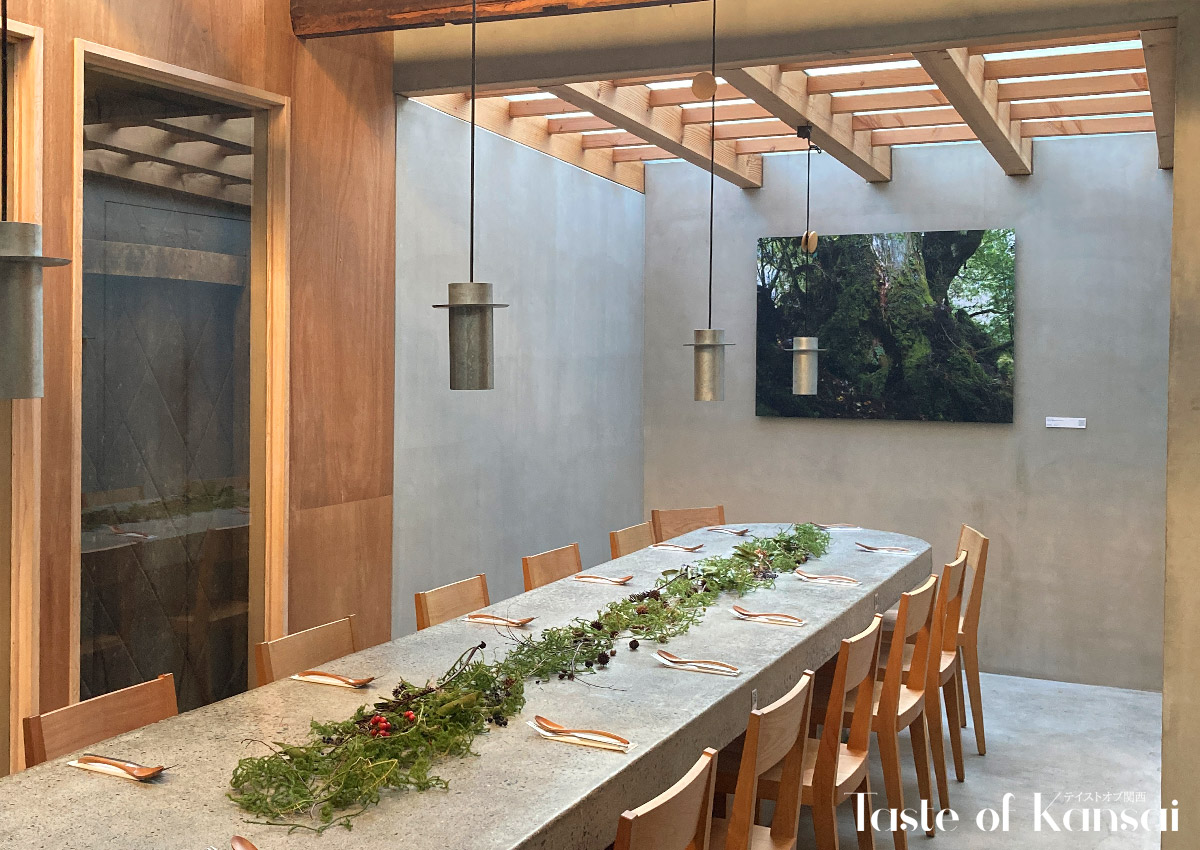 Entering the restaurant you will first order your food & drinks and pay in advance at the entrance. After that customers are guided passed the kitchen to the seating area in the back of the café which at first sight seems like a scene out of the last supper.

The dining table is a single long and narrow polished concrete table with wooden chairs around it. The table is decorated with dried twigs, leaves and berries. Above the table are cylinder shaped galvanized steel pendant lights.

The large photo in the back of the restaurant “Yakushima” as well as one near the water server are taken by a famous French photographer. 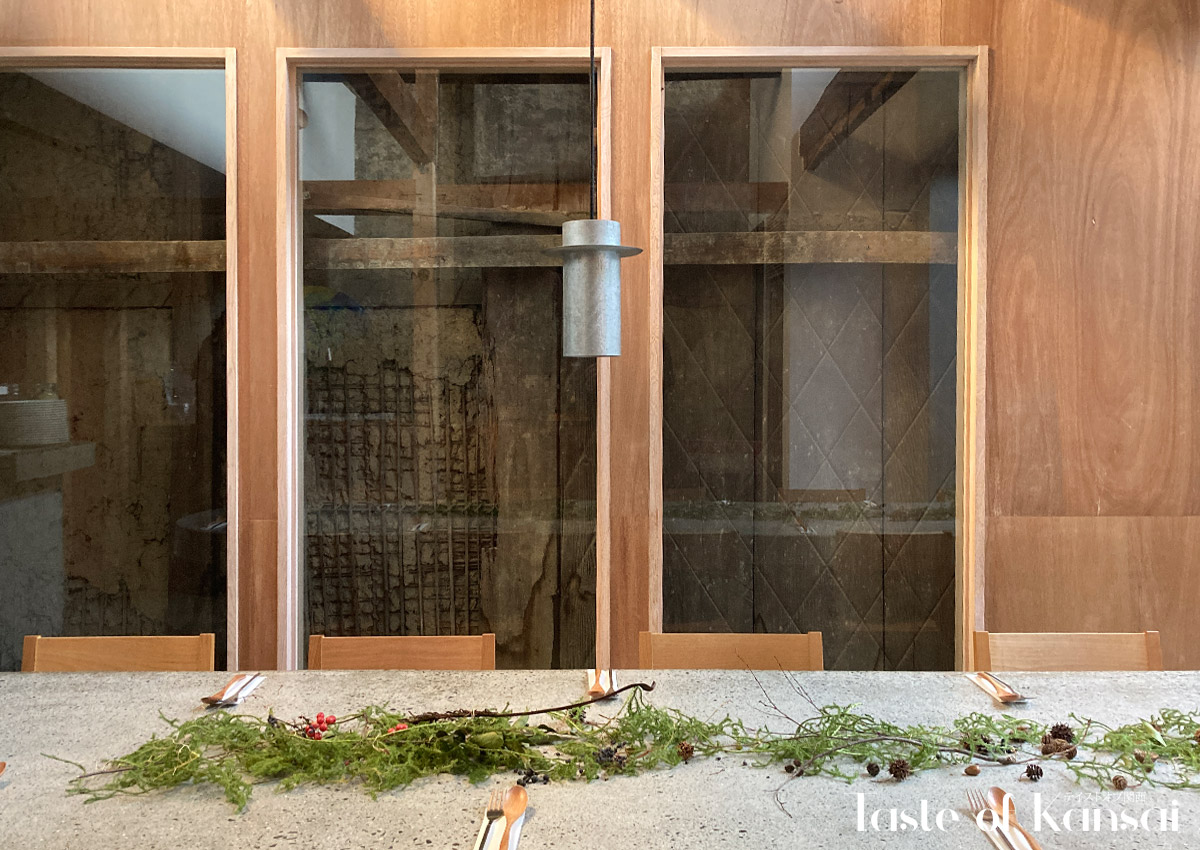 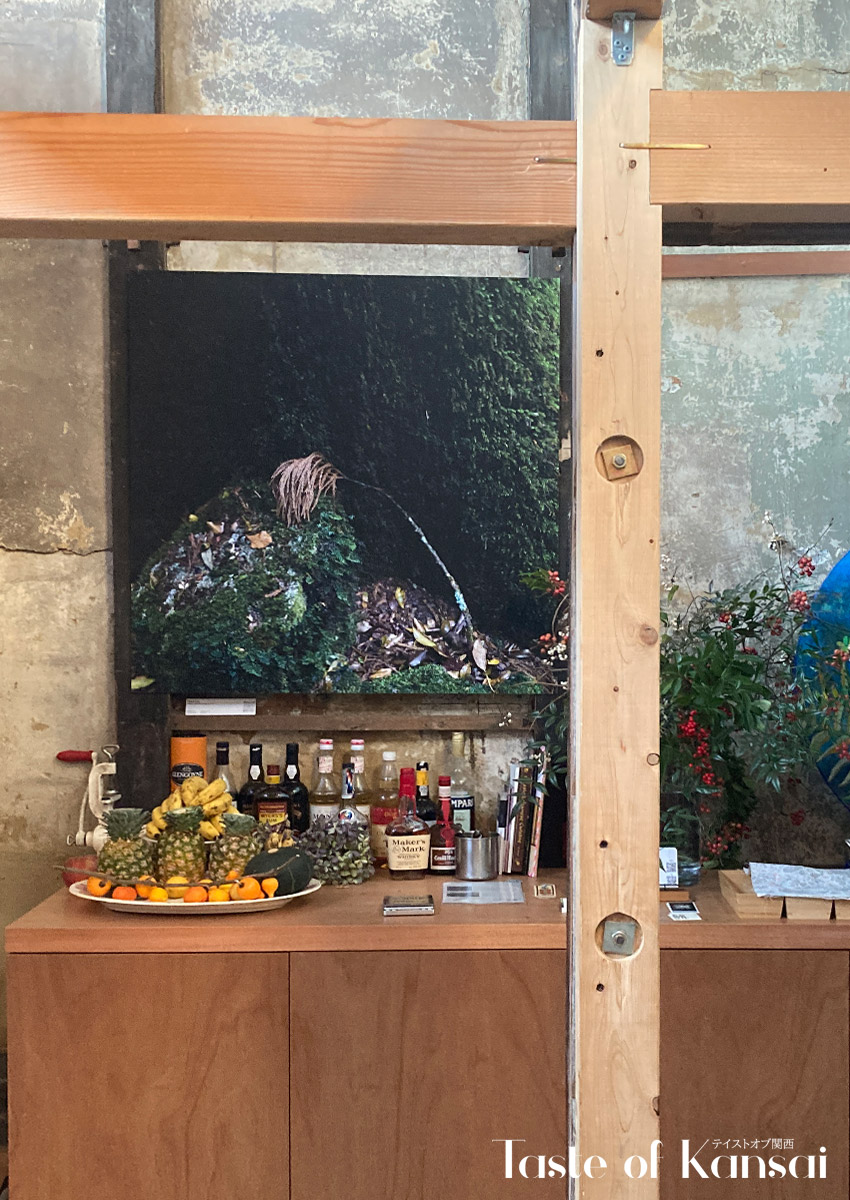 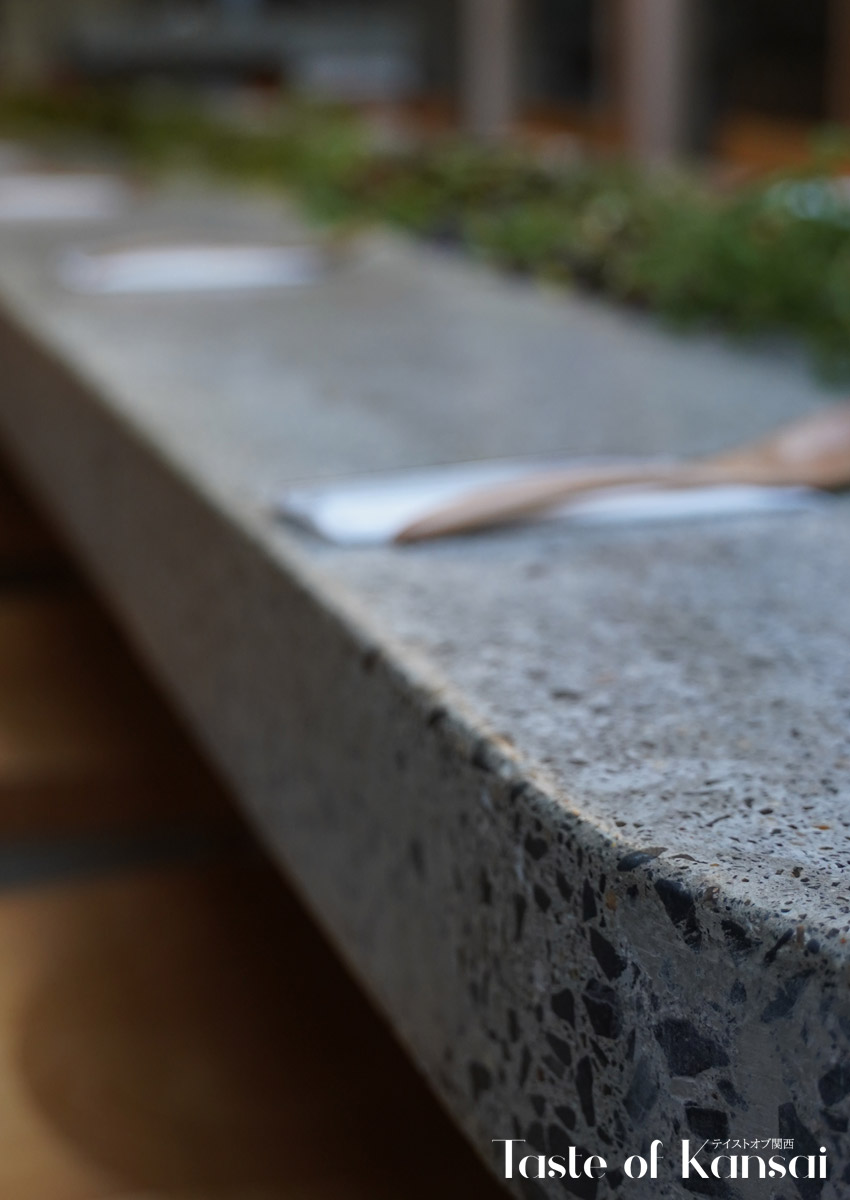 Restaurant Ki has two different menus for either early morning or lunch. The morning menu consists of a smoked chicken plate, a falafel plate or a mix of both.

The lunch menu has more options that include chicken shoarma, seasonal vegetables, beef shoarma as well as sweets or side dishes. 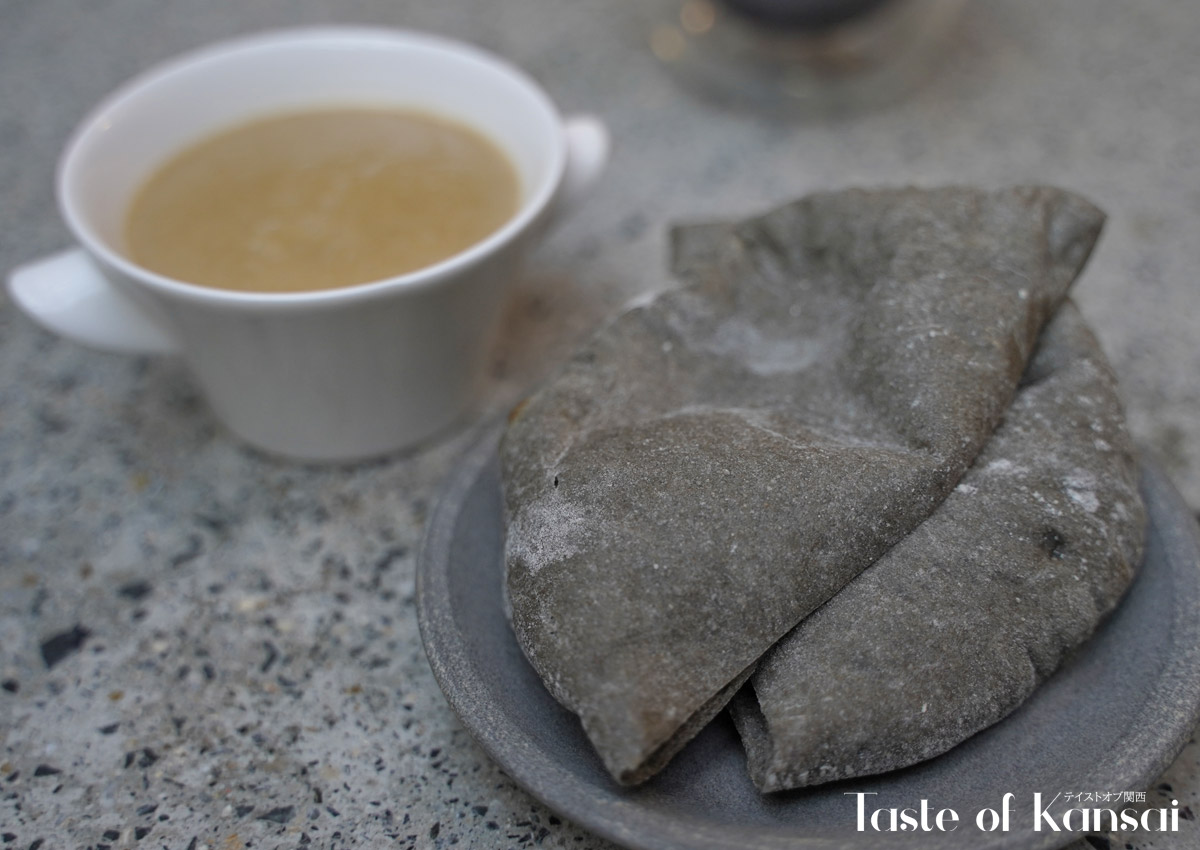 The dishes are carefully prepared and the food is beautifully arranged. Everything is usually prepared a little in advance so don’t be surprised to receive the plate within 5 to 10 minutes after you sit down.

The set comes with a bowl of delicious Jerusalem artichoke potage and two pita-breads. It’s a stomach filling amount so make sure you don’t eat in advance because it can be quite heavy. The different portions on the plate are enough to fill both pita breads and the flavor is absolutely amazing. Every portion is mouth watering.  Even the potato fries have a special flavor to them that cant be explained. Stuffing everything inside the pita bread, mixing all the different flavors is a must. 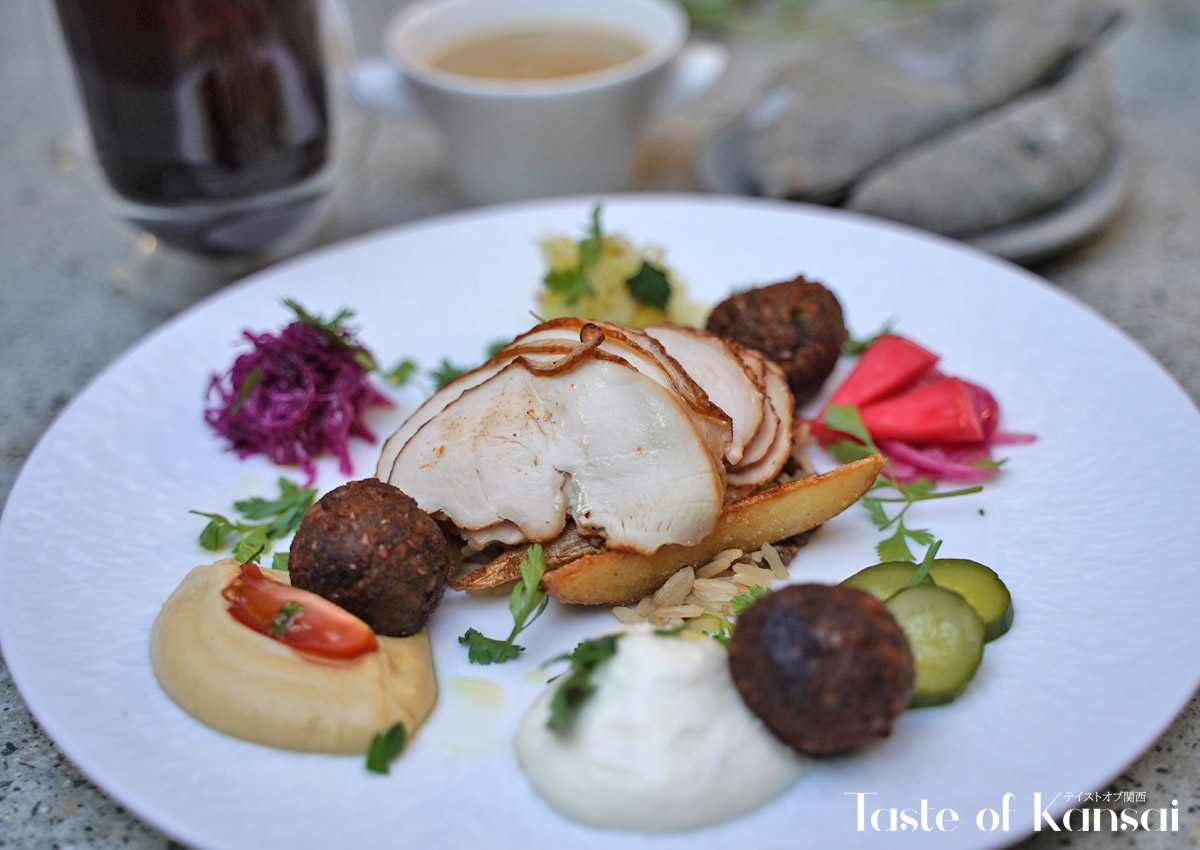 Restaurant Ki「汽」hasn’t been open for a year yet but is definitely a promising restaurant with a stylish interior that serves fantastic food. It has one of the best falafel dishes in the Kansai area. The plates are carefully prepared, look gorgeous and are served swiftly. Ki is hands down one of the top 10 restaurants to visit if you are in Kyoto. 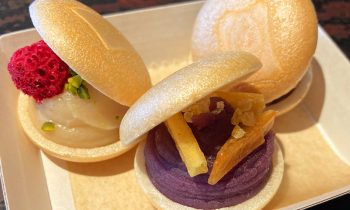 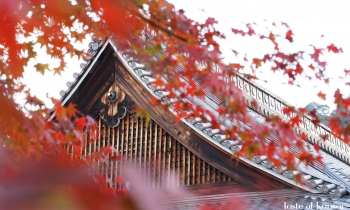 Looking for cafes where you can enjoy the beautiful Autumn season? We got you covered. 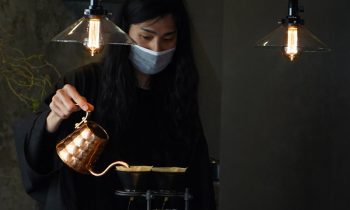 ‘Blend Kyoto’ is a new stylish coffee-specialty shop with an interesting concept and owner near Kyoto Gyoen National Park.

Our selection of wheelchair friendly cafes in Osaka.